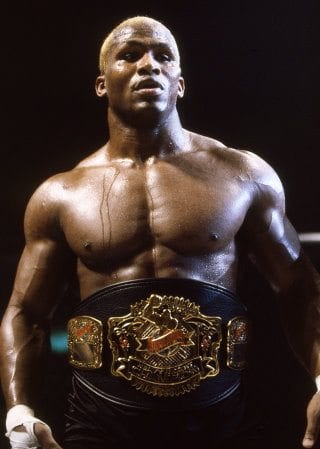 Kevin Randleman will always be one of the bravest men to ever throw a punch. When I think about Kevin “The Monster” Randleman I think about playing as him in one of the first UFC games, the one that came out for Sega Dreamcast that at the time blew my mind, took my $49.99 and stole about 200 hours and two friendships from intense digital fights. For nostalgic reasons I went on YouTube and looked the game up, it hasn’t aged well, only Mario 3 and Tetris have to be honest.

I think of how he lost to Randy Couture, how he kept saying, If I am going to lose, it’s going to be to another wrestler. Of course the Fedor slam, you can’t think of him and not think of that and I think of how he basically jumped higher than the cage itself, something that now that I’ve seen him in person I find incredible because he was actually short in comparison to everyone else he ever fought. I’m 5’8” and when I seen him last week he seemed shorter than me by a few inches, so the fact that he leapt into the air like that is very impressive. Then of course, as we often do to balance things, I think of him being forever cursed with bad luck. how I thought he would kill Chuck “no one knows who I am yet” Liddell. The staph infection that ate away his flesh, the car accident that he walked away from and the time he slipped on a loose pipe (back before the UFC had its stuff together) and knocked himself out on his way to the ring right before his fight with Pedro Rizzo. I wouldn’t say it was all bad luck, I’ll say it was, things that didn’t go his way moments.

This is something that going forward people will have to accept. Childhood memories and fighters passing away. MMA has been around a short time so it’s pioneer’s, unless death outside of natural causes happen are all still around. Many own gyms, teach seminars and some are probably fighting at Bellator in a month or so. Because of this, there are only a handful of fighters that we can say we passed away as opposed to completely vanished, like 90% of the people in that UFC game. When I think of Kevin Randleman now, when I look back at him and his career I think, I wish he would have cross trained with different gyms. I know he loved Mark Coleman and he was ever loyal to that hammer house team but Kevin Randleman was essentially a dull club getting thrown into the ring with razor sharp katana’s. He had a lot of success early because few people were ready to be bulldozed and thrown around, it broke most people. Once people learned that was what he could do, that he didn’t have a lot of other tools outside of that, his career changed. He’d lose and he would most likely train harder than ever to get back in the ring and win but he was just putting his body through more hell to bring the same game plan into the next fight.

After I seen Kevin Randleman last week I instantly thought, why was this guy fighting at Heavyweight? How did that happen? He’s smaller than Anthony Johnson, he’s technically in the 185 category. Granted, I seen him now and not when he was in prime shape, but had he did less weights and more cardio and cut weight to go down and fight someone like Tito, he could have been a lot more than people will ever know

The things that made Kevin Randleman fall short as a fighter are coincidentally what made him succeed as a man. His loyalty to his gym and his team are what made his skillset hit its peak way before it needed to. But it also gave him friends and family that he had in his life through good times and bad. His desire to stay in one place, with one group but that also meant he could get married, have kids, spend holidays with them and be a regular person.

As much as I say, and I didn’t mean this negatively, that he was a club in a world of razor blades, I think in the world of courage, he will always be the greatest fighter we know of. It takes a certain amount of courage to go to another Country back in the early days, back when riots were happening cage side, back when you were an attraction, someone that they hoped died in front of them so they could go home and say they were there. But none of that is why I commend his bravery. I can’t, because in truth, he has a very splotchy past, the guy turned in horse urine for a drug sample, he had a few run ins with steroids (I’ll add that in the end) during his career, so, yes to the courage to fight, but I don’t know how much or often he used performance enhancing drugs and to me (outside of the Pride days, when they told you to take them) disqualifies you in my world as a legit, honest to goodness hard working fighter. To me, and hopefully to others, he will forever be the bravest fighter you’ll ever see because here is a man that can crush you, that can slam you and paralyze you on the sidewalk and yet even with that ability he came out and told people how he was molested as a child. There is an unlimited amount of courage it took for him to be that open, to explain to people that you can take that anger and that rage and that confusion and you can move past it and use that rage to drive you to excel as a fighter or a mechanic or a runner or student or whatever you need to use for, but to use that rage and anger as a weapon for good, not a weapon of self destruction. That took courage, more than stepping into the ring and winning or losing a thousand times. With each glance from a stranger or each pause in conversation with an old friend that just found out he would have to wonder if it’s because they wanted to ask, because they wanted to say something. That’s a fighter. He did that to let others be okay, to let them feel less alone. That’s a more than a fighter, that’s more than a champion, that is a strong human being.

Finally, in closing and only because I am passing it on. I was very perturbed by Kevin Randleman’s death. When we seen him, he was very polite, we asked him for an interview and he said, he’d done them nonstop for 45 minutes, he would like to be done, he’d like to take his seat and watch the show. We said okay as, talking and answering the same questions over and over is exhausting, trust me. I have since watched some of his interviews, he doesn’t seem as sharp, as energetic, seems a little distant. But what confuses me is when I sat down for a beer with 3 doctors a few days ago I asked them how could a super athlete at the age of 44 get pneumonia and die of a heart attack. First question all of them asked me. Was he on steroids? The next question was, was he a very heavy smoker or maybe using a lot of cocaine? Those are the only three things they mentioned before our conversation shifted, but I’ll break down the reasons.

None of that last part is meant to tarnish or speculate, I don’t want to say anything bad about or accuse him of anything. I just add it because I asked a few doctor’s opinions and wanted to pass it along because why he died is still up for grabs. He shouldn’t have.

In the end, this Achilles’ like situation he was placed in, when I think of Kevin Randleman, I think of someone who did everything he could with what he had and when given the chance to have the people he loves close to him or to go out and find personal glory, he choose to love and be apart of their lives, to do everything he could with what he had available. He decided it was more important to be brave for them and not just himself. All things aside, I’d say that’s a good way to live a life.