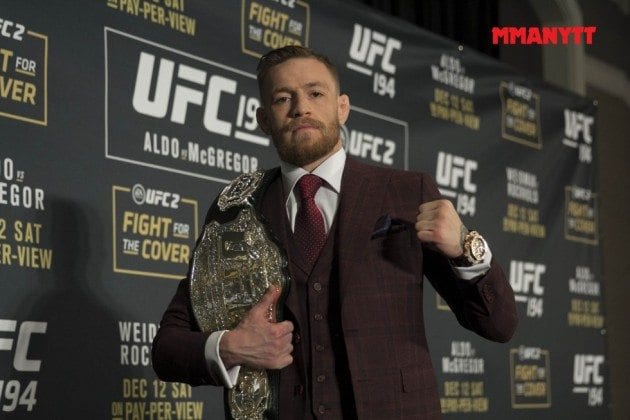 Just so we are all on the same page, I do not want to slander or say anything bad about Senór McGregor, I mentioned the most negative rumors that were floating around that I plucked from the internet sky and tried to make a joke, you can tell that because I quickly said, it’s hard to make a joke about that, so, calm yourself. If you did not laugh, welcome to the world of why I’m not a stand-up comedian. We plan to make an update video after work outs with the talk of Vegas and what everyone knows so far.

As of now, here goes.

Conor McGregor would never say no to promotional opportunities, let’s all get on the same page with that. Besides being one of the best fighters in the world Conor is a promotional machine that few fighters or even Popstars or Presidents are even capable of fantasizing replicating.

Conor asked for a whole bunch of money and in some ways I’d say he is worth it. But if the UFC said yes to his demands, they open the pay increase flood gates, next thing you know when a champion or a big name fighter has a contract end they will not resign unless they get ”Conor” money. You have enough fighters do that and all of a sudden we are watching YouTube street fights instead of the UFC main cards.

While I do think fighters (especially after the Reebok deal) should get as much as they can the while they can. They have chosen to take on a professional that has the average life span is 4 years and that 4 years can more or less diminish their livelihood and physical wellbeing by 10 years. Now, I’m not saying poor them, it’s unfair, no they signed up for the job, they could go become a bartender or accountant if they wanted a different career. Sometimes people who diffuse bombs blow up and sometimes they do not, career hazards are like that. Here is a dramatic reenactment of what happened between Dana and Conor and why Conor is pulled from UFC 200. (This is to be humorous. It’s not the actual conversation. Just my take on it based on what Dana White said in his interview with ESPN. So, again, fabricated version to get laughs.)

CONOR
I’m F’kin Conor McGregor, I’m the UFC king and I want. No, no, I demand 10 million dollars.

DANA
We need you to fight but do not call me telling me what you are going to get. I’ll tell you what you get and you’ll take it and say thank you very much, sir.

CONOR
Do not ever talk to King McGregor like that. I’m the King Baby! I’m the Game of Thrones, Lord of the Rings Macbeth Genghis Khan, Alexander The Great, King. I’m worth millions. I’m different than them. They’re all robots Compared to the Alpha / Omega man.

DANA
You cash big checks. I’m the one who writes them.

CONOR
You either pay me what I’m worth or I’m not fighting at UFC 200. You’re whole empire will tank, do not be a stupid business man here. You’ve seen my cars and suits I know how the money game works and you’re all amateurs. Pay me Conor McGregor money!

CONOR
Good boy Dana, check that bank account. Send that right to my PayPal account and I’m not paying the transaction fee’s either, those are on you.

DANA
And … send … .You’re not fighting. I just released the statement for you. Maybe had beat Diaz you’d have something but you did not deliver as promised. Do not ask for more money when you’re coming off a loss you dummy.

CONOR
You listen to me you bum-

DANA
-Don’t play chicken with me son. I’ve dealt with the Irish Mob before. You’re Irish, but you are not the Irish f’cking Mob. When I see you next time, don’t forget to bring your f’ckin shine box. So, Good day, sir. Lastly, the Internet does not break, the world does not stop and UFC 200 will go on. Not as planned and it might not sell out as fast and will now have less Irish people showing up, but the machine keeps churning out entertainment as it eats it’s young. That’s how the machine works. Who they get, I honestly can not say as their big names are all tied up into something else or with somewhere else. Hopefully Conor does not take this personally and sit out during the prime of his career. Could happen as it would not be the first time a fighter screwed their own career for a few years (Frank Shamrock, Randy Couture and a few others come to mind) If Jones can get through the UFC 197 easy and with no injuries we will probably see him and DC added onto UFC 200. That’s my best guess.

Who would you guys like to see take UFC 200. Would you still get on a plane, fly to Vegas and pay to see the fights with Conor not on the card? And lastly. Aldo. Spilt Milk. Homie, move on.