Krönika: The Nick Diaz, so long and goodbye 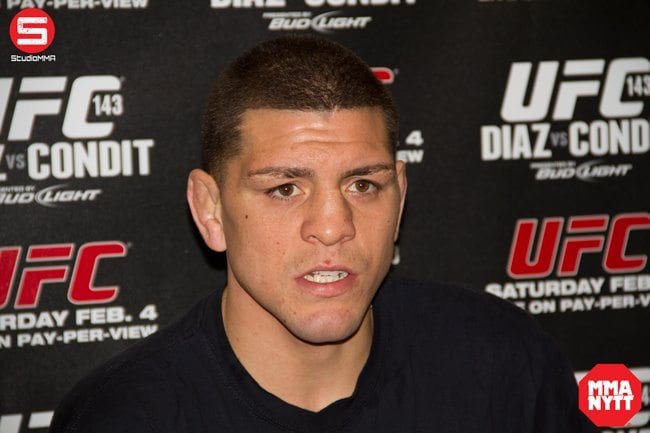 Why Nick Diaz won’t be back.

Pending some magical work on his lawyers behalf, Nick Diaz will be the first fighter, as a farmer would say, led out to pasture and put down. If this were only a Nick Diaz issue, I think this wouldn’t be an so… hmmm… a little unfair I guess is the word. All there is to say is, this is his third strike breaking a drug rule set forth by a NSAC, despite claiming to be an unbiased commission they are showing everyone that they hold grudges and if you show up once or twice in their courtroom you won’t be making a living as an athlete anymore. I’m actually okay with that, you shouldn’t break a rule three times and be just let go.

The reason this gets muddy is Anderson Silva on the same night and in the same fight tested positive for an actual performance enhancing substance (with 100% certainty having something to do with his leg or the recovery of his leg) Anderson only got a year suspension, the decision of the fight overturned and fined the amount of $380,000 USD (3,134,164.00 Swedish Krona). Despite the amount being more than Nick’s (fine is based on a percentage of winnings), Anderson can fight in a few months and make way more than that again and again. Meanwhile Nick will be teaching white belts how to pass guard and making $200 for seminars for the next 5 years. It shouldn’t matter that much as he has said before any of this that he’s retiring and I guess this is him going out on their terms and in some ways, the way he’d probably want to walk away. Angry, bitter with a middle finger in the air and being told you are no longer welcome here.

To me this is where the confusion comes in, as they did three separate test and Nick passed two of them but for whatever reason failed the third (by a lot.) I don’t know if it was one urine sample divided into the three separate tests or if it were three samples taken at different times or how they did it. As of this writing that hasn’t been disclosed. While the NSAC has officially listed what is illegal and what is not, they never created different levels of infractions for different substances. So they lump marijuana in with steroids and all banned drugs.

Meaning if I had a 14:1 ratio of testosterone the way Alistair Overeem had when he went all roid rage crazy thinking no one would test him or the way Kevin Randleman used horse urine for a test a decade ago, Nick did a crime just as punishable as those cheaters according to the athletic commission. I’m going to assume that as an athlete and Californian that Nick has a medical marijuana card and can find some sort of exemption the way others were using TRT and claiming they needed it because there bodies, despite being men in the manliest of sports and having children and in their 30’s couldn’t produce testosterone anymore (huge scam).

While I completely believe anyone, including retroactively (if you compete in the UFC and have ever, even ten years ago while fighting in the UFC) that was caught using steroids in the UFC should be banned for life, I can’t help but think this is the wrong way to handle it. If you’ve heard Joe Rogan talk on his podcast he claims that it’s not a performance-enhancing drug one week and then another does a podcast where he essentially claims that it makes people super human with the focus of a Astronaut and the endurance of ten Kenyans. So, don’t listen to him and whereever he is hearing this research of his, there are still people that think the moon landing was a hoax and that smoking cigarette’s is healthy, so, listen to actual professionals not people with a black belt in youtube and a degree in message boards. Marijuana, in this case is by definition a performance-enhancing drug. But in reality, no, it’s not. I’m drug free, so I can’t say first hand, but if you guys picked three random people and said, this one is a pot head, this one has been drinking vodka, this one is on steroids and this one is coked out of his mind and fleeing from a car accident with a bag of cash. Even if the guy that was high was Tank Abbott and the others were all… Fred Ettish. I would fight Tank based on what drugs were in his system.

A lot can happen in five years but at 32 years of age and a withering interest in fighting as is, I don’t see Nick’s career coming out of this. I think we should start making highlight video’s that say 2001-2015 now and talking about how good he was and could have been now. Unless that decision gets overturned soon, we will most likely never see Nick Diaz fight in America outside of parking lots or in the crowd of an arena ever again. The only answer I would buy is if they came out and said, you’ve started two riots, you got into a fight in a hospital and sprayed blood everywhere, you’ve failed multiple drug test, you’ve skipped appearances and grappling tournaments we would put you in jail if we could or fire you but we can’t so your suspended for five years. If they said that, I would then say, well, yeah, I guess that guy shouldn’t be allowed to fight anymore as he seems kind of insane. But if we are going on just this one incident, he should be fined and he should fight next month. If he decides not to retire, I suppose he can go compete in other countries although the competition he’d be fighting wouldn’t be fair and would be a waste of his time and talents. (Ben Askren aside) At least over there he could fight high and make some of that $168,000 back.